After having been invoked consistently by many, for the last few years now, over the fabricated and distorted story of LVCNR’s past that has been showcased on the KCNR website (http://lvcnr.net/kars-cops-and-robbers-the-5th-year-kcnrdrama), I am here to pen down some excerpts from the reality.

The LVCNR community has been growing ever since its comeback and there have been many misconceptions and queries in the minds of people about LVCNR, which is obviously attributed to the false information that is being fed by the KCNR website. This is one of the main reasons that I decided to pen this article here, despite having ignored the falsified version of the story for all these years. My intention is only to put forth the facts of LVCNR’s true past, and enlighten you over the myth you’ve been forced to believe into, by Kar.

I am writing this only to counter the biased “story” Kar has presented on his website (http://lvcnr.net/kars-cops-and-robbers-the-5th-year-kcnrdrama), and all the fuss he’s tried to create over it while trying to demean me using worst possible derogatory & filthy language against me (which obviously depict his maturity levels!). In fact, had I still been ignorant like I had been for before, it would mean being unfair to the true past. Therefore, I decided to make an attempt to uncover the covered, bring about few facts that were hidden from you and put before you, the reality. I would then leave it to you to decide the rest!

I had first joined the SA-MP community somewhere in 2009. The Cops & Robbers servers were always very amusing to me. I started my regular job after graduation in 2010. In late 2010, I came across a guy named Kar who was running a home hosted server (a bmuk base cnr). It was called Elite CNR.

The server was running poor, since it was not available 24/7, in addition to heavy lags, etc; as it was home-hosted. I was eventually made an admin after some time of play. Things continued as they did. Some time later, Kar met a guy named Dustin Parker, who had an established community, but was going down without players. That community was LVCNR. Dustin was looking for someone to take his community ahead, as he was getting too much inactive to be handling the community.

Kar took Dustin’s script, merged it with his own, thereby giving rise to an amalgamated (mixed-up) script that was then run on Dustin’s paid hosting for the left over days of the month, after which the server had to expire. Few screenshots show how the old LVCNR Forum & website looked. They were designed by me. 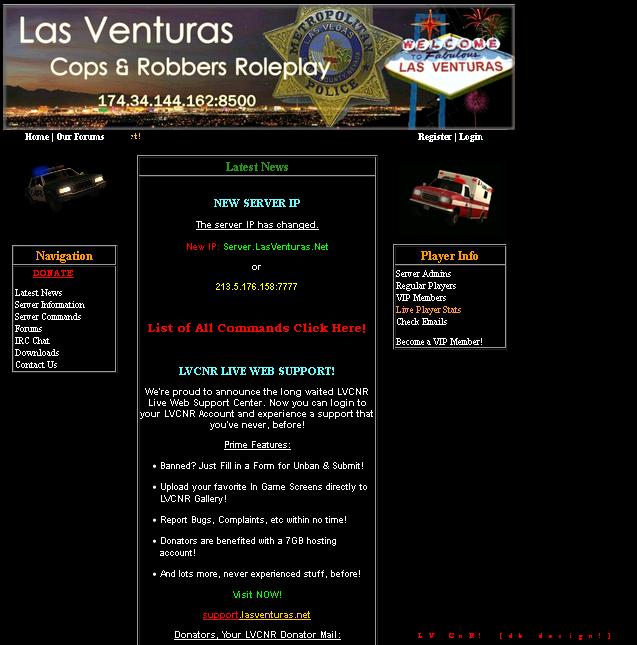 On his website, Kar claims that he had met Dustin only after our episode, giving an impression that the three of us never worked together. He claims the same everywhere. Take a look at the below screens. Now you know the truth!

Discussions with Dustin about LVCNR

Discussions with Dustin about LVCNR

Trivia: The Parker Estate mansion & the Parker Farms zone in game have been named after Dustin Parker.

I and Kar grew closer with time on Dustin’s server. Kar knew that I was employed and was earning. When the server expiry was nearing, he asked me to buy 24/7 hosting service, by offering me to become the Owner of the community, in return. We agreed to some terms and I purchased a hosting service, thereby catering to all the financial expenses. I also paid for the expiring official domain of the community (www.LasVenturas.Net – which was originally owned by Dustin) & extended it. I gave Kar full access to all these services that I had purchased. 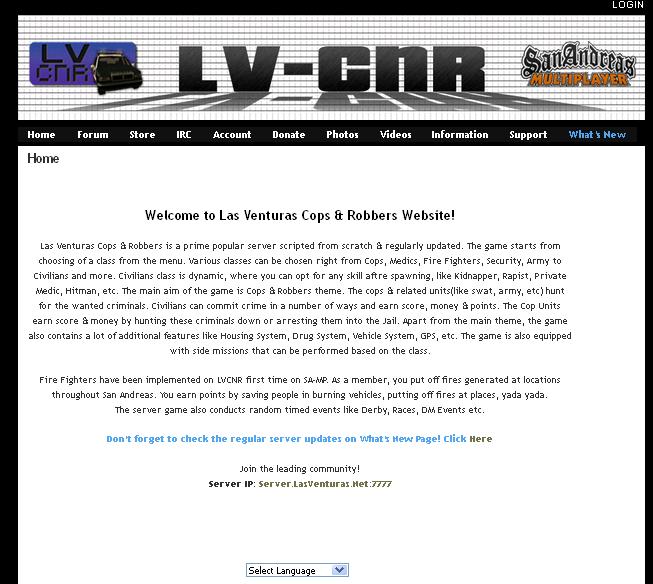 I & Kar, then, ran the community where in all the web development, server promotion, server media, graphics, etc were handled & crafted by me and also paid all the bills pertaining to the monthly host, hosted tab & the domain; while Kar worked on the amalgamated script of the community. In short, I was the owner & he was the Co-Owner. I used to regularly monitor the server bugs, and reported them for fixes. I also used to propose new ideas & features to be added, in order to develop the server further and expand the community.

The adjacent screen shows an erstwhile LVCNR website made by me.

Somewhere in mid – 2011, I didn’t know why, but Kar stopped discussing over suggestions, never acknowledged the reported bugs, stopped paying heed to the community needs; basically he became too ignorant and arrogant in his conduct. On his website, he claims that I was being a ‘dick’ & a ‘retard’ (with a lot more chunk of filthy expletives for me) for having expected him to add updates to the script. (Uh..Really?) He probably didn’t want me to review & monitor the community, but just pay the bills. I thought that I was being helpful in supporting Kar’s scripting, but I didn’t know that I was just a “Money-minting-Machine” for Kar, in addition to the time & efforts I had put for all the community activities. The below screen shows a sample of email conversations I used to have with Kar during those days. 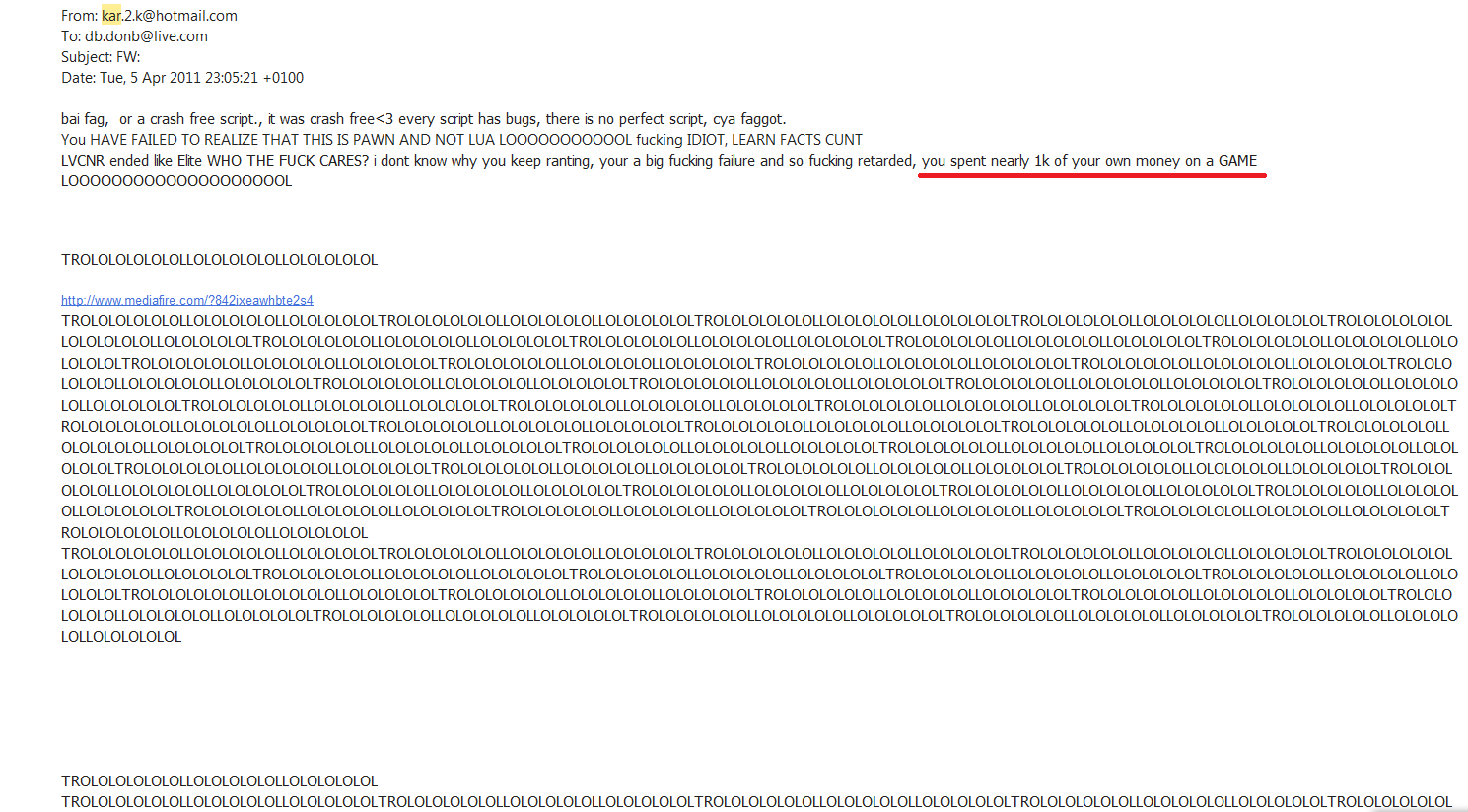 After a few months, Kar tried to secretly sell the server script on a 3rd party sa-mp forum (Andreas-Market). He had given the community’s main server IP as a demo for anyone who wanted to see the script before purchasing. Wow! He probably assumed that the main server was merely a test server to showcase his script, and not a part of a running community! Apparently, it felt like the whole community was put at stake, and was back-stabbed. It felt as though I was paying to showcase his sale, and not to run the community. Sigh!

We then, obviously, had some arguments and later Kar found a new “Money Machine” and got settled for another server. They named it after this original LVCNR community, probably in order to gather the playerbase. They still claim themselves as our protrudes (Extension).

In 2011 end, I had announced that the community was being temporarily suspended and that the community would return soon. Sticking to my word, and the idea of returning back, I had continued to extend the validity of the original official domain and the server for 4 years (Yes, I kept paying).

In 2015 December, on the auspicious day of Christmas, the original LVCNR community had made its return to the SA-MP community. Source: The Flashback

In fact, Kar had made an attempt to devalue LVCNR community on the SA-MP forum, and was eventually trolled after the facts came up. It was probably so humiliating for him, that he insisted on locking the thread that he made!